Southern African Foundation for the Conservation of Coastal Birds 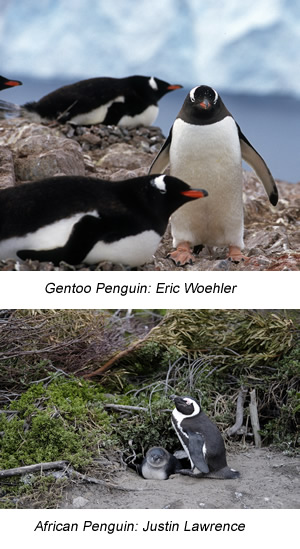 More than half of the world’s penguin species are threatened with extinction, according to penguin experts convened at the 9th International Penguin Congress in Cape Town last week.

Penguins are among the most beloved and well-studied bird groups.  Restricted to the Southern Hemisphere, they range from Antarctica to the Galapagos Islands.  According to specialists, many species cannot cope with threats such as habitat loss, pollution, competition with fishermen for food, and climate change.  Several species of penguins also face threats from entanglement in fishing nets used by commercial and artisanal fisheries. All of these threats could be eliminated by proactive human action, but still the majority of penguins face a very uncertain future.

The plight of the African penguin, the most rapidly declining of all 18 species, has focused international concern on South Africa and Namibia. In the 1950s, more than 140 000 pairs bred up and down the coasts of those two countries. Today, only 25 000 pairs remain. African penguins are threatened by food shortages, climate change, human disturbance, and increased predation by seals.  Oil spills also pose a continuous threat; the Treasure oil spill in 2000 hit the main penguin landing beaches, and oiled nearly 20 000 penguins.  There have been 14 major oil spills in South Africa since 1968.

“The good news is that two species of penguins, Adélies (pictured in photograph above by Eric Woehler) and Gentoos, are doing better than when the International Penguin Congress convened three years ago,” said Dr Pablo Garcia Borboroglu, co-chair of the IUCN Penguin Specialist Group.

“One of the major positive changes in the last three years has been the increase in marine protected areas around the world,” said Dr. Dee Boersma, of the Global Penguin Society.  “For more than 30 years, we have studied Magellanic penguins in Argentina, and finally in 2015, the government and the international community approved a UNESCO Biosphere Reserve in Patagonia that should help penguins as well as other marine species.”

The group recommended strengthening laws and policies relating to fisheries and management of human activities that negatively impact penguins. “Even though there is some good news, we cannot be complacent.  Immediate interventions are needed to better manage the marine environment,” says Boersma.

Conservationists and avifauna experts from all over the world came to Cape Town for the conference, which is organised by a local committee headed by CapeNature’s Dr Lauren Waller and includes representatives from the University of Cape Town, the Department of Environmental Affairs, the South African Foundation for the Conservation of Coastal Birds (SANCCOB), and the University of Bristol. The congress was sponsored by the Global Penguin Society  and The Royal Society for the Protection of Birds (RSPB).